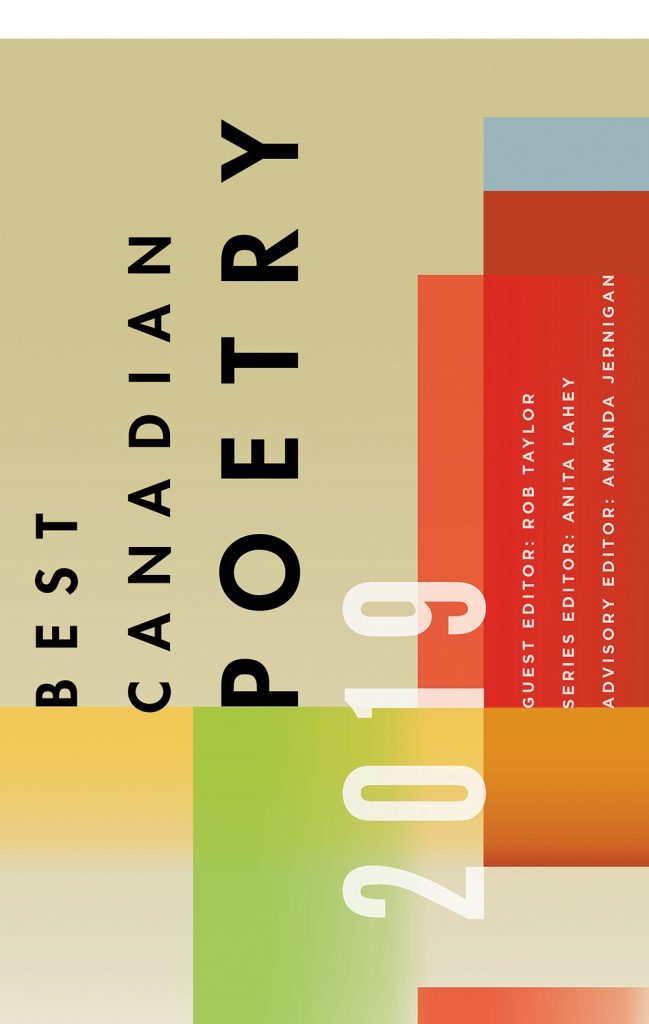 I had the pleasure of guest editing Best Canadian Poetry 2019, working alongside series editor Anita Lahey and advisory editor Luke Hathaway. It was published in October 2019. The anthology features my fifty favourite poems by Canadian poets that were published in periodicals during the previous year, along with a list of fifty more “notable” poems. I hope it proves to enjoyable for both new readers of poetry and those long-devoted to the craft.

I wrote an essay for the Literary Review of Canada about making time to work on this anthology, which you can read here. I also wrote about the experience in a blog post, in which I included the full list of “notable” poems. You can read that here.

“[A] must-have for libraries, schools, and intellectually well-intentioned bedside nightstands across the country.”

“An admirable anthology that surveys the inspired writings of a wide cross-section of Canadian poets writing today. Taylor’s anthology reflects the range and depth of that writing and, equally, it places on full display the sophisticated and nuanced approach of an editor who took his responsibilities as an anthologist very seriously… Taylor has brought deep, careful and above all insightful judgment to the choices he has made—perhaps more thought than any Canadian anthologist since Gary Geddes gave us his foundational 20th-Century Poetry and Poetics back in 1969.”

“A collection to be read and appreciated over and over, a collection that offers excellence and stirs the soul.”

“It’s meaningful, and pleasantly surprising, that the editors… decided to recognize the value of voice and perspective over sonic dazzle. These pieces show that dazzle can come in many forms.”

“It’s clear that… there are some gems to be found in Best Canadian Poetry 2019.”