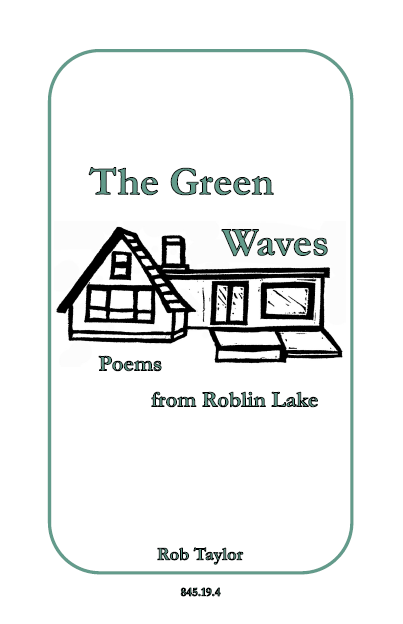 The Green Waves: Poems from Roblin Lake is a sequence of fifteen poems, most of which were written while my family was living at the Al Purdy A-frame in Spring 2016.

The Green Waves was published in October 2019 by 845 Press, and is available in print and digital forms.

“It’s remarkable that such a small book could be in conversation with so many people, voices, and forms with a tenderness undergirding work that often centres on Taylor thinking through the expanding dynamic of a family.”

“The content itself speaking volumes, Taylor’s language employs a musical colloquialism that would have made Purdy proud for its ability to let the events of the poems shine brightest… With moments of flourishing descriptive skill, it is the subtlety of Taylor’s voice that is most astounding in this collection….

Taylor poses important questions to which nobody has the same answer, though it seems as if all of us ask them. How do we remember the people we have lost? What about those who came before us? How can we move forward in light of the past? Taylor won’t give you his answer in The Green Waves, but the chapbook might help to illuminate your own.”

Luminosity, the ability to make mundane objects glow while holding onto their “thing-ness,” is a difficult poetic skill to master. Rob Taylor has managed to do just that in The Green Waves – and with Al Purdy relentlessly peering over his shoulder, no less.

—Michael Mirolla, publisher at Guernica Editions and author of The Facility

I love how these poems tackle the subjects of grief, joy and family in a subtle, sweet-bitter landscape. The collection is an immensely powerful and inventive way to tell a story everyone can relate to.

—Bola Opaleke, author of Skeleton of a Ruined Song

Throw another log on the woodstove; spring has “hitched back to Toronto.” Driving the country roads of memory and legacy, Taylor address his young son sleeping in his car seat, his father’s ashes, his wife whose arm rests “on the lip of fat above my hip,” and even Purdy himself, thanking him “For ferrying nothing, not one blooming word, with you across its black eye.” Tender and human, these poems allow us to see
the unseen dust that settles on everything.

—Bren Simmers, author of Narratives of the Lost

“I doubt you’d have liked me. I don’t drink. / I make nice. I stunt my opinions.” Without romanticizing or acquiescing, Rob Taylor’s collection pays tribute to larger-than-life Canadian poetry icon Al Purdy, and the A-Frame Al and Eurithe built on Roblin Lake. By turns moving and quietly humorous, these poems inhabit the A-Frame with a new dailiness of parenting, mice, loss, and attention to place—adding to the legacy of one of the most storied dwellings in Canadian literature.