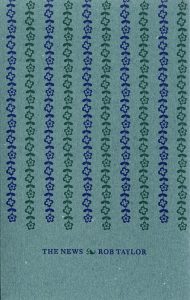 My second poetry collection, The News, was published by Gaspereau Press in September 2016, and went into a second printing in March 2017. It’s a series of 36 poems, written one per week throughout my wife’s pregnancy with our first son. As the back-page description puts it:

‘The news’ can mean many things, but first and foremost in this collection the news is—We’re having a baby! Starting in the fifth week of his wife’s pregnancy, Rob Taylor wrote a poem every week as they traveled toward their child’s birth. His poems anticipate the astonishing and yet commonplace beginning of a human life, but they also explore how a baby’s arrival streams into both the incessant chatter of the world’s daily news and into that other sort of news that literature carries—what Ezra Pound called “news that stays news”.

You can read a CBC article about the book, and listen to my interview with the CBC’s Sheryl MacKay, here.

“[The News] nourished the well-meaning father in me. I can hardly pretend to be objective about this. The collection succeeds as a meaningful, occasional gift to my particular demographic, and will likely be given in the same way that Wendell Berry’s The Country of Marriage is given on the occasion of marriage…”

“His charming and insightful blending of life and death, memories and premonitions, often catches the reader off guard with casual offhand profundity… Thanks to his poetic directness we are emotionally with him and his family all the way.”

“A book that accurately and disturbingly conveys our moment.”

“Sifting through recently published poetry collections, it seems that we are working in a moment where the faculty of the poet is conveyed by how far they can distance themselves from the emotional stakes of their own work. The News has an odd and noteworthy relationship with sentimentality… Rather than striking an ironic and self-effacing stance, a stance which a lesser poet would no doubt have taken, Taylor engages honestly, vulnerably, and aptly with his topic… Despite this being the poet’s second collection, it will no doubt be cherished like a first born.”

“While other works might choose either to be only a personal journal, or simply a critique of the state of the world and humanity, it is Taylor’s journey towards a more empathetic perspective that allows him to transcend both.”

“These conversationally philosophical musings, with an undercurrent of the terrible/horrible news infiltrating baby’s beneficence, find ‘tension’ and ‘intimacy’ waltzing.”

“My favourite lines in The News have the father-to-be telling the baby, who isn’t presenting head-first and may need to be cut out in a C-section, that violence and beauty are both part of “The double life / you’ll learn to love.””

“The book’s structure is somewhat rigid — unavoidably so — but Taylor’s best poems have a compensating capacity to surprise. They succeed in showing how the extraordinary resides in the resolutely ordinary passage of days and weeks, and in a phase of life so common that we have all experienced it: “That’s the thing about news— / you’ve heard it before.””

“I don’t think he comes to a conclusion. That’s part of the power of the book: he learns to grapple with and live with this uncertainty, which is, I think, a lesson all parents have to learn eventually.”

“The writing, like the cover of the book, is organic and beautiful. The words, images, and ideas in each poem pile upon each other, sparse fragments that work together intricately and richly…”

“The poems are an attempt not only to communicate but alleviate, to come to grips or terms with this new, colossal undertaking and to understand the meanings and implications in the news that you’re going to be a father… This is a fine suite of poems. I hope to see more from Rob Taylor. That is, if he ever finds the time. Reports are in, the baby is already a big, bruising young boy. He may prove to be a bit of a distraction.”

“Overall, the collection is incredibly enjoyable as the poems seem realistic and relatable. Although the book may be most appealing to parents, the book is great for all, as it opens the minds of readers to realize the anxieties of welcoming a new life into the world.”

“Taylor’s new book makes you not want to take anything for granted. Waking up to your partner playing Ella Fitzgerald. Dinner with friends. Appreciating a good cranberry sauce. The news is good.”

The News on Goodreads