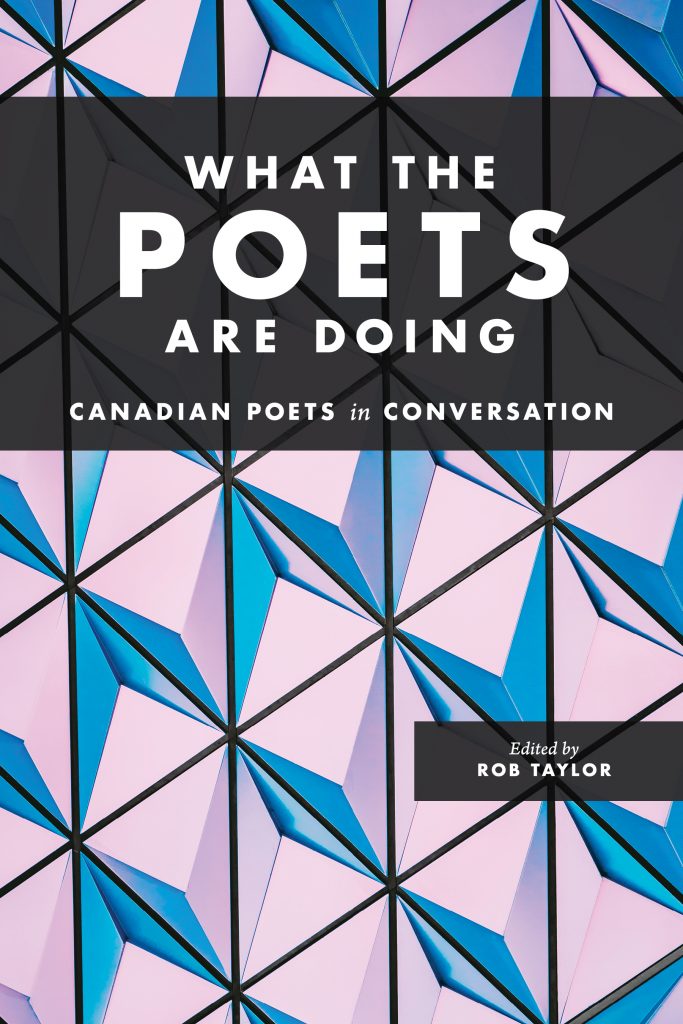 In 2002, Nightwood Editions published Where the Words Come From: Canadian Poets in Conversation, a successful first-of-its-kind collection of interviews with the likes of Margaret Atwood, Michael Ondaatje, Margaret Avison, Patrick Lane, Lorna Crozier and P.K. Page, conducted by “the younger generation” of poets of the day.

Sixteen years later, I’m honoured to bring together two younger generations of poets in What the Poets Are Doing: Canadian Poets in Conversation. These twenty-two poets engage in conversations with their peers about the world of Canadian poetry in the new millenium: what’s changed, what’s endured, and what’s next.

The book features conversations and poems by:

“This gem of a book sees several generations open up on writing, loss and life, and is a riveting read, akin to stumbling on private letters between your most literary and intriguing friends.”

“What the Poets Are Doing: Canadian Poets in Conversation is a delightful little collection of interviews between contemporary Canadian poets. Running the gamut from wonderfully intimate conversations amongst close friends to more demure exchanges between strangers, this anthology has something for everyone.”

“Let this timely and necessary collection of poet conversations be but the second within this series of more to come.”

“The pairings are undoubtedly inspired.”

“Reading this book feels like eavesdropping on the conversations of poets, or like I’ve hacked into their email accounts and am reading their personal correspondence… As a creative writing instructor, I’m finding so much in here that I can share with my students to show the kind of lateral thinking involved in writing poetry, and that poetry isn’t written in a vacuum, but reflects and responds to the world we live in.”

– Shashi Bhat, The Writers’ Trust of Canada 2018 Books of the Year

“The collection… has a breadth and kind of delight in openness and a willingness to range beyond textual concerns which is immensely welcome.”

“This is, I would say, one of the examples of the follow-up surpassing the original, moving beyond the limitations of a particular aesthetic into a possibility of subject matter, one that is incredibly far-ranging and timely. Part of what this curated list of poets allows for is also the possibility for multiple conversations around race, representation and how a variety of violences have impacted individuals and communities, as well as writing, and how writing has been forced to adapt in response… this book does well to allow for those conversations, some of which might be seen as long overdue.”

“Rob Taylor’s What the Poets Are Doing opens a door onto perspectives in contemporary Canadian poetry, and it’s apparent to me that the poets are asking of themselves, and of their readers, that imagination, above all else, greets the poems they are writing.”

“Overall, the book displays the diversity of ideas hovering behind the writing of these authors, and of poets in general. Although poems often seem so private, the poets here display a relentless obsession with the social world and how their work interacts with this world.”

“With authors such as Raoul Fernandes, the book shows its readers not only that the poets are doing things, but also that they’re doing it in style.”

What the Poets Are Doing on Goodreads

Purchase What the Poets are Doing